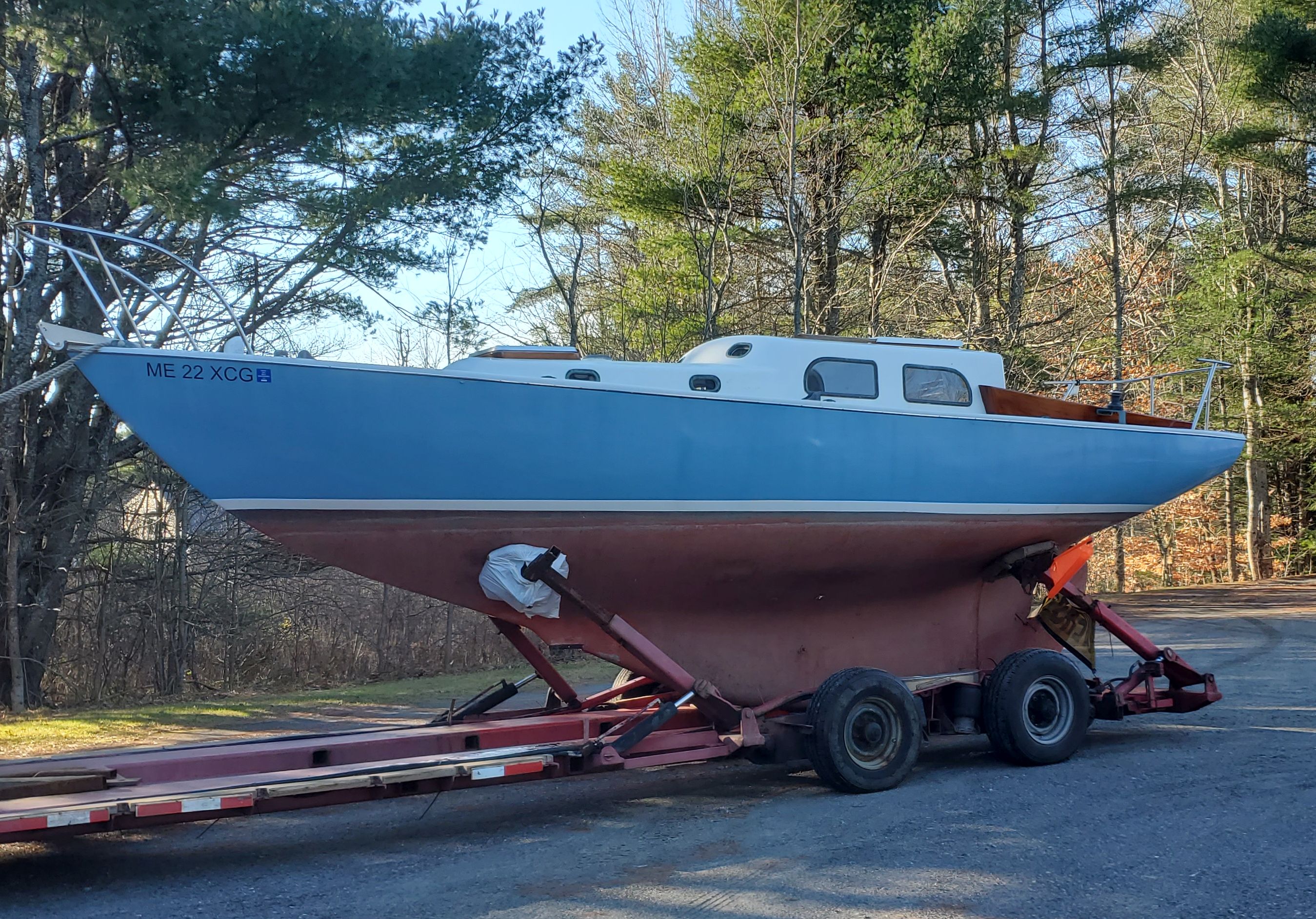 After a morning errand, I spent the remainder of the day working on the decks, starting with some investigation of the small area of the starboard upper coachroof where I’d identified possible core problems earlier.  A couple test holes drilled through the top skin confirmed the presence of wet core, with related debonding, so I (carefully!) cut the top skin off with a saw, which went swimmingly and as expected, revealing ruined core beneath, as well as a section of bright, good core.  I slightly expanded my initial cut to expose all the damaged core in the area, and quickly scraped out the old material.  For now, I left this area as is for repair work to come soon.

To let the details of the upcoming deck rebuilding at the coachroof come into greater clarity, and to keep the project moving forward, I decided to focus the rest of the week on bulk surface prep on the deck.  The existing paint was a 2-part polyurethane (not LPU), and whether or not it would be compatible beneath the paint I planned to apply, much of the deck exhibited paint failures, failures which were clearly exacerbated by the boat’s 10-year period of uncovered neglect under previous ownership.  Nevertheless, I couldn’t risk leaving any of the old paint in place, so I set about removing the paint, starting on the main coachroof.  Before starting, I draped some plastic sheeting over the companionway to keep out the worst of the dust.  Using two sanding grits, I removed all the old paint (in basically good condition in this are) from the coachroof and down the forward-facing side leading to the lower, forward section.  Small bits of remaining paint here and there would be removed during several later rounds of finer sanding and hand work to come.  I stayed just short of the small area to be recored on the starboard side, as I’d be grinding the deck around the repair area in the near future.

Next, from the relative comfort of the staging, I began at the port poop deck and, during the remainder of the day, worked my way forward, removing the old paint from the decks, molded toerail, and cabin sides with a two-step sanding process using 40 and 80 grit paper, eventually reaching the foredeck by the end of the day.  Forward of the cockpit, where the deck became cored (the narrow sidedecks outboard of the cockpit, and the poopdeck, were solid fiberglass), I found that the gray material covering the decks (the sidedecks and foredeck had been recored during the work a decade past) was highly durable and therefore didn’t seem to require wholesale removal:  anything that could stand up as indelibly to the sanding onslaught to which it was subjected would probably be an acceptable substrate for the paint system to come (though I planned a compatibility test to be sure).  There’d be additional, finer sanding by machine and hand to come to deal with tight spots, toerail corners, and to remove the last vestiges of old paint.  The newly-exposed decks so far were in the expected condition:  old gelcoat with lots of previous repairs, mostly sound (cabin sides and after sections); and the rebuilt sidedecks in good condition and ready for new work.  I’d continue the surface prep next time.