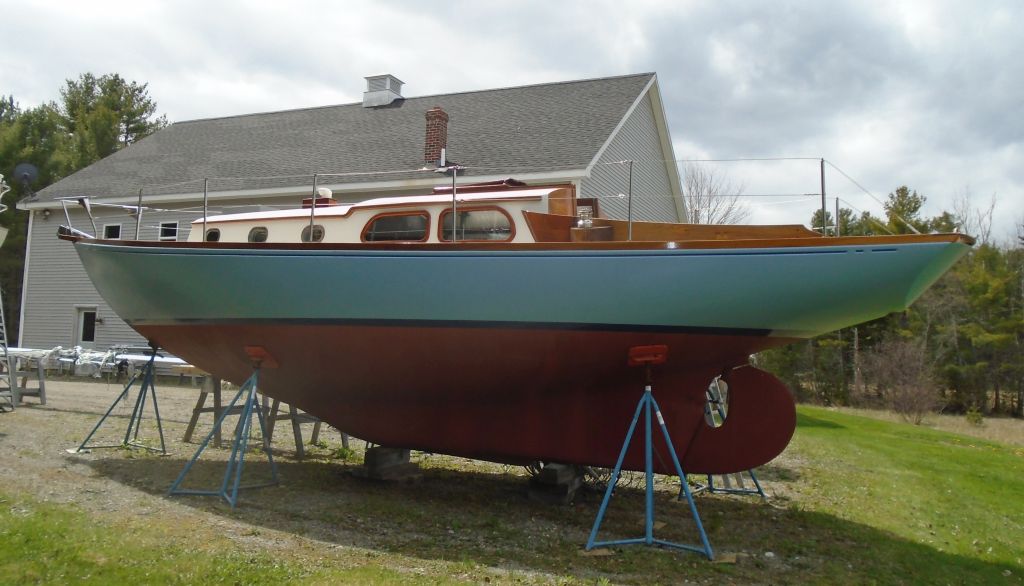 In 2011, after reconfiguring the galley and engine room spaces in this boat (the original area had been completely rotted out), I installed a new Beta 25 diesel engine in this boat (during  Phase III of the project), but the engine had sat idle and untested until now.  With various factors and complications at hand, the owner had put the entire project on hold shortly after the engine installation, with work only resuming in fall 2015 and, of course, now.  The long delay had not been anticipated at the time.

So, five years later, I looked forward to finally test-firing this “new” engine.  I started by adding fuel (6 gallons to the new tank), coolant, and oil as needed, and checked the raw water pump impeller to inspect its condition.  I filled the fuel filter with clean diesel, and bled the engine at the secondary fuel filter until I got clear fuel from the bleed screw.  (14mm)  This is a really nice engine room, if I do say so.  Roomy and with outstanding access to the engine.  This made all the preparation and testing work a real pleasure.

With all initial preparations complete, I started the engine.  It started right away, and nearly kept running, but there was still air for it to work through its system.  The second time, the engine kept running, even as it worked through a few air-related fuel hiccups, as per usual.

After running the engine for a couple minutes, I shut down in order to check the fluid levels.  I added a bit of coolant and engine oil as needed to top up the levels once more.  Then, I proceeded through a longer engine test, which I recorded in the following videos.  I found that the new engine control was loose, and allowing the engine speed to change on its own, so after a while I stopped the engine again and adjusted the control as needed, after which I could actually leave things alone without holding the control lever or manipulating the lever on the engine itself.

The test was a  complete success, and after running the engine up to temperature and for about 20-30 minutes’ total time, I shut down, with the last major check mark off my work list.

After cleaning up and buttoning up the boat again, I turned to the new mast, which required a couple lights and a VHF antenna.  All the wiring was pre-installed by the mast builder, but it was up to me to source and install the fixtures.

The wiring at the masthead exited the spar (by necessity) just below the halyard sheaves, and to improve appearance and secure the wiring on its way to the ultimate masthead, I sheathed it in some flexible conduit and secured it to the spar in a couple places with rubber-lined clamps. During a brief rain delay, I unpackaged the new fixtures (the VHF antenna was backordered briefly) and changed out the incandescent light bulbs for some new LED bulbs that I purchased for the purpose.

After the rain shower ended, I got back to work on the anchor light at the masthead, which I installed on top of the masthead strap.  I repurposed one of the screws securing this strap, and used it to also secure the light fixture, and added a second screw (with spacers beneath each to allow room for wiring) to finalize the installation.  I made up the wire ends and secured the screw-on lens for the fixture.

I’d continue with the VHF antenna and the steaming light, along with the wiring at the mast base, next time.

0600 Weather Observation:
40°, mostly clear.  Forecast for the day:  sun and clouds, showers in the afternoon, 60s