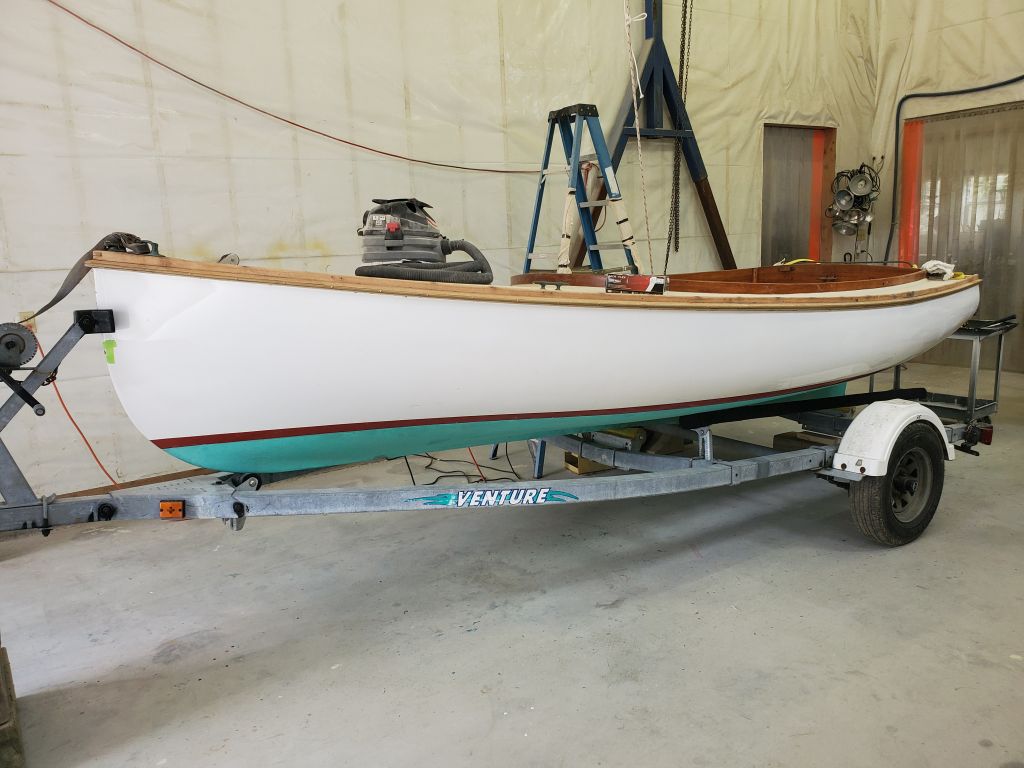 The owner of this 14′ Handy Cat had a short list of small items he hoped to address this season.  We’ll get to the list of projects later in this post, but perhaps the most significant of the jobs ahead was to track down and solve a mystery the owner had observed during previous seasons’ use.  This particular boat had been modified from original at some point in the past:  the original molded interior liner, which had incorporated floor and seat bases, had been cut out aft of the foredeck, and a new permanent sole glassed in place, along with knees to support wooden seat slats.  This new installation was supposed to isolate the bilge sump from the cockpit, but the owner had observed that when the boat was in the water, water got into the sump somehow anyway.

It wasn’t clear where the water came from, but the owner wondered if it was coming up from around the centerboard slot, or centerboard pin, or thereabouts.  However, while I had the boat in outdoor storage for some weeks leading up to the project, during which time the boat filled partially with rain (and snow) water, I noticed that water was slowly draining out of the cockpit, and dripping ever so slowly from the sump drain in the keel.

Repeated observation (helpfully, it rained and snowed frequently during this period) showed no signs of water leaking from outside the centerboard slot in the bottom, but I did notice that there were a few small cracks in the tabbing where the new cockpit sole had been glassed to the centerboard trunk, mainly on the forward starboard side.  With the way the boat sat on the trailer, with a bow-down orientation, these cracks remained below the surface of the water, and water kept slowly draining out through the sump.  Never did the drainage stop, since with frequent rain the level never dropped below these cracks, so to that extent I couldn’t confirm that the cracks were the culprit, but this seemed the most logical starting point in terms of stopping the problem.  I planned to inspect the bottom around the centerboard slot as well, hopefully to eliminate that as a further possibility, but it seemed likely that reglassing the centerboard trunk ought to help the problem.

In any event, with the time at hand to bring the boat indoors for the project, my first step was to drain out the water in the cockpit, and in the sump as well, so I lifted the trailer high and pumped out the cockpit with an electric sump pump, and allowed the remaining water in the sump to seep out as well.  Once the boat had drained, I moved her indoors.

With the front end of the trailer propped up enough to bring the boat more or less level on her waterline, I mopped out any remaining water from the two narrow sumps built into the cockpit sole around the centerboard, and cleaned up various pine needles and other debris left behind.

The wooden slat seats had suffered some damage on the forward port side, where the inboard-most board had been broken off, and badly “repaired”.  These seats were built from a softwood of some sort–it looked to me like cypress–and the damage to the seat was from a combination of factors:  weak wood; a curvy design that was unsupported at its outboard edge; and stock that was thinner (1/2″) than it probably should have been.  The starboard seat still had the original shape of its innermost board for comparison.  Repairing the broken board, and changing the shape of the starboard seat, were on my to-do list, though for the moment the owner wanted to refrain from completely rebuilding the seats in a more appropriate material–a possible job for another time, but not now.

I found that the seats were easily removable:  there were four exposed screws holding the seats in place to the knees beneath, and the three seat slats on each side were held together independently by additional cleats beneath.  So in short order I had both seats out of the way, which would not only make repair easier, but also opened up access to the inside of the boat for the centerboard work.

Among the other jobs on my list were to install a brass (no one makes bronze half oval) half-oval trim on the rubrail to replace one that had been damaged and removed previously, and to install new gudgeons for the rudder, which the owner had ordered and had on hand.  So I spent a few minutes determining what was needed for each job and ordering the required materials, since in our new world shipments tend to take a few days longer than in the past.

In the woodshop, I removed the broken board from the port seat.  I found that the slats were also glued to the cleats below, with Gorilla glue, but I didn’t have much trouble getting the slat off without damaging the cleats beneath.  I wasn’t worried about the slat itself, though I did manage to get it off in a whole piece.

Leaving the starboard inboard slat in place, I laid out a new shape for its forwardmost end, creating a new curve that was less wide at its extreme, and cut and sanded the new shape as needed.  I planned to use this plank to pattern the replacement on the port side.  I temporarily removed the wooden base for the boom crutch from the aft end to allow me to more easily pattern the new piece; as it happened, this block was already half-loose, as one of the nuts had fallen off sometime in the past.  I had to slightly cut back the support cleats in way of my new plank shape, bringing the ends back 1/4″ or so from the edge.

Because of the owner’s stated wishes, and the fact that these seats weren’t something worth spending a lot of time on with their questionable construction and oddball materials, I had to make my repair appropriate to the existing conditions–a type of work Larry Pardey would have called “cheap and cheerful”.  As it happened, I had some red cedar deck boards on hand–hardly my first choice for boat seats, but red cedar would soon weather gray in keeping with the existing condition of the seats, I had it on hand–thus it was cheap and available now–and it would do the job for a finite period of time while the owner decided how better to proceed in the future.  I didn’t have any more suitable material on hand, wasn’t sure where I could source cypress, and it didn’t really seem important to match the material that closely anyway.

A single board wasn’t wide enough to handle the curves at the ends of the seat slat, so I with epoxy I glued up extra width forward and aft as needed to make the final shape required, and clamped the assembly together overnight.