Scope of Project:   Rebed windows and other sundry tasks 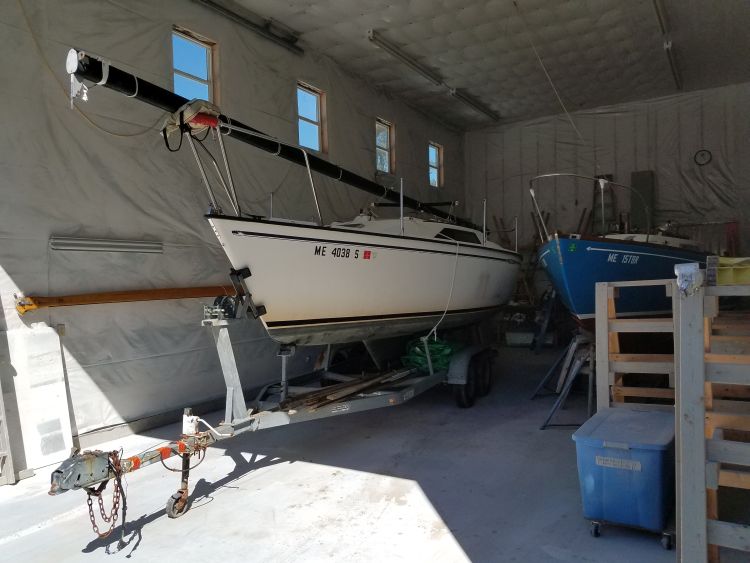 One of the two chainplate cover plates that I’d rebedded and reinstalled a year ago had pulled up from the deck, as the fasteners hadn’t held properly.    So I went ahead and removed both cover plates to reinstall them more securely, as well as rebed–again–the chainplates.    I cleaned off old sealant around the chainplates and the slots, revealing that the sealant in the slots themselves was actually still in good condition and sound, other than an indication on the port side (the side where the cover plate had pulled up) that there might be some transverse chainplate movement under load.

To better hold the plates given their propensity to pull out, I thought I’d through-bolt them this time.  The design of the structure beneath the chainplates was such that I could through-bolt the after two fasteners on each cover plate, but the forward pair of fasteners would run into the plywood bulkhead and/or a structural support frame and knee built into the underside of the deck, so for those locations I planned longer screws to pass through the deck and bite into the structure beneath.

To prepare the decks for the new penetrations, I used a 3/8″ bit (the largest possible within the confines of the cover plate) to open up the existing fastener holes and ream out the core within the deck, leaving the inner skin intact.  Afterwards, I filled the new openings with a thickened epoxy mixture, leaving that to cure before continuing.

Later, with new sealant on hand, I reinstalled the large plastic windows.  Starting on the port side, I applied beads of the sealant around the perimeter of the window’s footprint, as well as a secondary bead closer to the actual window opening in the cabin trunk.  Then, I installed the window, screwing it down tightly with new black-colored stainless screws, and cleaned up the excess sealant.  I was dismayed to find that the black sealant got into the pores of the gelcoat during cleanup, making the process more difficult and time-consuming, though in the end I was able to remove the staining.  Because I soon realized that continuing attempts to clean up perfectly were futile, I ended up leaving some squeezeout at the port edges for now, and would finish up the trimming once it cured.

Forearmed with my experience on the port side, on the starboard side I decided to leave all the squeezeout and cleanup  alone till it cured, at which point I’d trim the excess and clean up as needed.