With better weather hopefully on the horizon and a need to finish up the new canvas work, the owner asked that I uncover the boat and remove the frame, after which I set up the bimini bows to be ready for Jason to fit the top (which was complete) and pattern the side curtains.

A day or two later, with decent weather, Jason arrived to fit the top and make some final sewing alterations to complete the support pockets, the center one of which he’d left unsewn to ensure the fit was correct.  Then, later that day and with the top fully sewn, he returned to pattern the two side curtains, which he’d build during the rest of the week.

Once the mechanic was done with his engine maintenance work inside the shop, I moved the boat back outside so that he could run the engine and finish the winterizing with antifreeze through the system.  I left the boat resting on blocks, but still on the trailer, while Bill finished his work aboard, then pulled out the trailer and finished setting up the boat stands.

Afterwards, I reinstalled the two vertical frame supports I’d removed to allow engine access, then installed the aft section of the new cover.  These inside photos were taken before the lines securing the cover tightly were installed, but give an idea of the fit and padding from within.

Finally, outside the boat I finished up the cover with the various lines to secure it and pull it tightly.

Jason was back this morning with the completed winter cover, which we installed successfully and with ease.  The fit was excellent, though–not seen here–Jason insisted on taking back the forward section so he could install zippers on each of the slots around the bow pulpit bases, which was a nice addition and really brought together the forward end of the cover.  (It’s done and I didn’t photograph that stage.  We’ll see detail on that later, once the boat is outdoors and fully buttoned up).

Now that the cover was complete, I had to remove the aft section, as well as move two of the frame braces, to leave enough room for the mechanic to come do his engine maintenance and winterizing chores in a couple days, after which I could complete the cover for good.

In a short day, I finished up the brightwork maintenance by reassembling, then reinstalling, the companionway hatch and doors on the boat.  Jason was also at the shop for a quick test-fit of the winter cover, which fit well but he’d left some of the grommets uninstalled as he’d wanted to be sure of their placement first, so after confirming the fit, he returned to his shop with the cover to finish these final details, and would be back the next day for the final installation.

I began the day with some minor reassembly on the boat, beginning with the anchor roller and chain stopper on the anchor platform; the grabrails on the windshield; and the forward bow for the bimini top.  I did not reinstall any of the snaps along the edge of the windshield, since the canvas guy said he planned to replace all these when installing the new canvas later.  I also reinstalled some of the loose trim, including the cockpit edge trim and access panels, that were now complete.

The companionway hatches and doors required a second maintenance coat on their main sides, so after the usual prep and cleaning I applied the varnish.

Next, I needed to install the framework for the winter cover so that Jason could come back the next day and properly fit the cover he’d built about a year ago, but which had never been installed.  Even though I’d have to remove parts of the framework to make room for the mechanical work that would happen a few days hence, it was important for Jason to have the opportunity to install the cover in the controlled conditions of the shop.  Though I’d conceived and built the framework myself the previous year, this was the first time I’d installed it on its own, and, following some instructions I’d put together after the original construction, I was pleased with its simplicity and modular construction, and that the installation was straightforward and logical.  The frame took an hour to install start to finish.  Afterwards, I removed both sections of the bimini frame, since the cover required they be out of the way–but the support they provided during the installation of the frame was invaluable and a key part of the installation simplicity.

Pleased with the second planned maintenance coat of varnish on the windshield, handrails, engine box, companionway trim, and other areas on the boat, I removed the masking tape and cleaned up the inevitable small varnish boo-boos on some of the adjacent surfaces.  I planned to leave things as is for another day before thinking about any reassembly or reinstallation of hardware, to give the fresh varnish ample cure time.

The first side of the two-sided hatches from the companionway were complete and had had enough cure time so that I could turn them over and finalize the prep work on the opposite (in this case the “money side”, or most exposed side in the finished product) before applying the first of the two planned maintenance coats of varnish here.

The end of this project was quickly approaching, and to prepare for my needs over the next couple days, I pulled the new winter cover frame I’d built a year ago from storage, and prepared the pieces for assembly next time, once I felt the varnish had cured to a safe stage.  This would allow Jason, the canvas guy, to return shortly thereafter with the custom cover he’d patterned and built a year ago, for its first actual fitting before the boat was ready to head outside.    This would be a temporary installation, since the owner’s mechanic would need access to the boat a few days hence to perform his own annual maintenance and winterizing chores, at which time the boat would move outdoors and I could finish up the cover installation permanently.

Starting early, I lightly sanded the first coat of varnish on the windshield, handrails, forward hatch, bow platform, and other trim on the boat, preparing it for the second coat ahead.    Afterwards, I vacuumed and solvent-washed the prepared surfaces and nearby to remove dust.

I had to leave the shop for an appointment, but upon my return I tacked off the wood I’d sanded earlier, then spent the remainder of the day applying the second coat of maintenance varnish to all the on-board trim.  I didn’t have time to continue with the doors, hatches, and other trim that I’d been working on at the bench, but would resume work there next time.

With the existing brightwork sanded and cleaned, my next step was to mask off around the wood as needed, on the windshield, helm area, engine box, around the handrails, forward hatch, and anchor platform.

After final preparations and tacking off, I applied a coat of varnish to all these areas on the boat, as well as to the loose hatches and trim pieces down in the shop.

Jason was on hand during the morning to pattern the new top for the canvas enclosure.  After examining the old canvas, then making some minor adjustments to bring the existing frame back into symmetry, and set up properly for the new work, he prepared a new pattern from plastic material in the usual way, working forward to aft in sections to make an accurate pattern that, while so much gibberish to the uninitiated, would make sense to him back at his shop.  He preferred to do the side panels only after the top itself was built, so for now he focused only on the top.

The old top had a problem where the bimini ended and the side curtains zipped on, in that the inherent tension in the top, and the position of the break, caused the top to curl when the side panels were removed (as they often were).  The owner requested that we try and address this issue, so to that end Jason roughed out a new line, shown here in a black dash mark, where the new top should end, just below the curves of the frame and less affected by the design and tension of the top, while not so low as to look strange.

Meanwhile, I continued with my own tasks with the brightwork, beginning by disassembling as needed the companionway doors and hatch, then sanding all the loose pieces to prepare them for maintenance coats.  The existing coating was in good condition on all these parts.  I cleaned and, as needed, masked the parts and set them aside to await delivery of my new varnish supply.

Once Jason was finished with the pattern, I could get back to work on the windshield and other on-board brightwork, removing the remaining hardware and sanding and cleaning all the woodwork.  Most of the existing coating was in good condition, but the windshield, as usual, had a few places near the seams where the varnish had lifted in small areas, and the trim atop the engine box had suffered when the box was moved around repeatedly during some engine work over the past year.  These areas required a bit more prep, and would require additional varnish to rebuild.  By the end of the day, all the wood was prepared, vacuumed, and solvent-washed, and ready next for masking and the first of the maintenance coats. 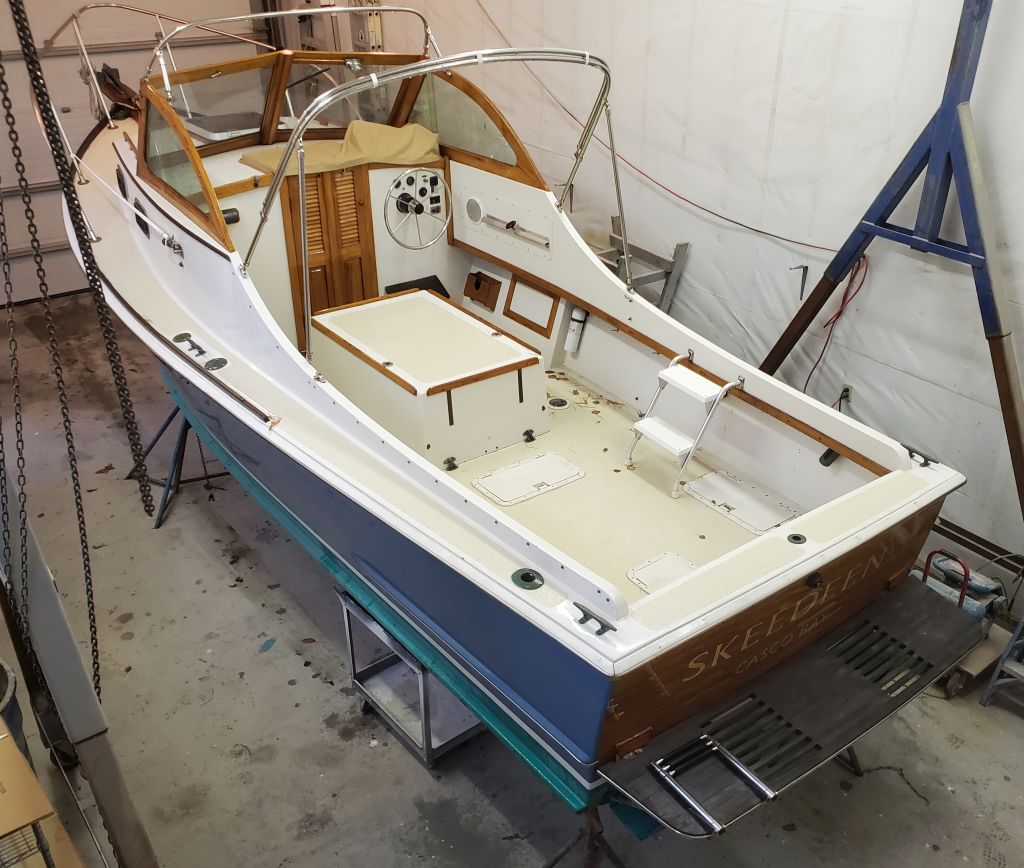 Easing back into the routine after summer break, I got started early in the week by getting things back into order around the shop, clearing out temporary storage and other projects to make room for boats again.  With this done, and after a preliminary meeting with Jason, my canvas  subcontractor, to discuss the immediately-upcoming role he’d play in a couple of the several canvas projects lined up here for the winter, I elected to move Skeedeen, which had been delivered some weeks previously, into the shop for Jason’s convenience in patterning a new canvas enclosure for the helm area, as well as to get going on my own standard mostly-seasonal maintenance work on the brightwork.  With what appeared to be a break in the rain (it wasn’t), I jumped at the opportunity to get her indoors so Jason could get to work, and before the even worse rain arrived over the next several days.  The boat was blocked a little low for my trailer, and I had to make some adjustments before I could load the boat.

The next day, I got started by installing the old canvas top on the frame for reference.  This top was over 10 years old and had held up fairly well, but was overdue for replacement.  These photos are for general reference only.  I hadn’t seen the canvas in some time and was amazed how faded the original color had become.

Meanwhile, preparing for the brightwork maintenance work ahead, I removed all the pieces I could, including the companionway hatches and cockpit trim.  Later, once the initial work on the new canvas enclosure was complete, I’d continue and remove the hardware from the windshield.

Total time billed on this job today:  2.5 hours (over both days)