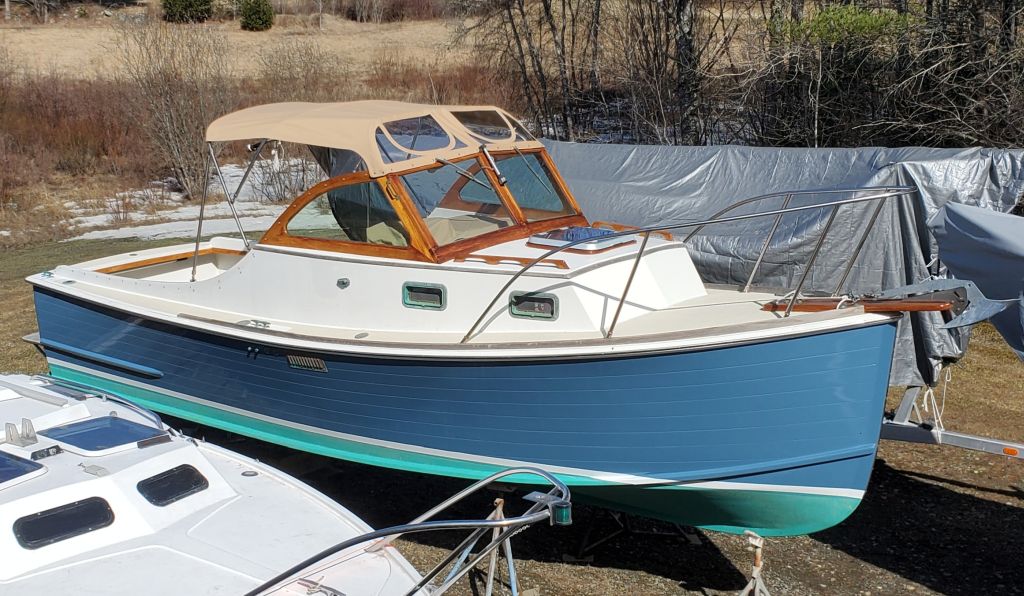 Jason was on hand during the morning to pattern the new top for the canvas enclosure.  After examining the old canvas, then making some minor adjustments to bring the existing frame back into symmetry, and set up properly for the new work, he prepared a new pattern from plastic material in the usual way, working forward to aft in sections to make an accurate pattern that, while so much gibberish to the uninitiated, would make sense to him back at his shop.  He preferred to do the side panels only after the top itself was built, so for now he focused only on the top.

The old top had a problem where the bimini ended and the side curtains zipped on, in that the inherent tension in the top, and the position of the break, caused the top to curl when the side panels were removed (as they often were).  The owner requested that we try and address this issue, so to that end Jason roughed out a new line, shown here in a black dash mark, where the new top should end, just below the curves of the frame and less affected by the design and tension of the top, while not so low as to look strange.

Meanwhile, I continued with my own tasks with the brightwork, beginning by disassembling as needed the companionway doors and hatch, then sanding all the loose pieces to prepare them for maintenance coats.  The existing coating was in good condition on all these parts.  I cleaned and, as needed, masked the parts and set them aside to await delivery of my new varnish supply.

Once Jason was finished with the pattern, I could get back to work on the windshield and other on-board brightwork, removing the remaining hardware and sanding and cleaning all the woodwork.  Most of the existing coating was in good condition, but the windshield, as usual, had a few places near the seams where the varnish had lifted in small areas, and the trim atop the engine box had suffered when the box was moved around repeatedly during some engine work over the past year.  These areas required a bit more prep, and would require additional varnish to rebuild.  By the end of the day, all the wood was prepared, vacuumed, and solvent-washed, and ready next for masking and the first of the maintenance coats.