The primer was well-cured overnight, and to begin I lightly sanded the hull to smooth the primer and prepare it for whatever topcoat the owner chose (final painting was outside my project scope).  It was easy and quick to sand the primer, and afterwards I removed the masking tape, vacuumed, and solvent-washed to complete the project.

After letting the new varnish sit for more than a day, I turned the boat over carefully and propped it on some saw horses to raise the hull to a comfortable working level.  As I was masking off varnished gunwale and the waterline, I discovered a series of old holes in the transom that I’d not noticed before, so before I could get to the primer I had to prepare and epoxy-fill these holes.

Fortunately, it was a very warm day, and with some heat lamps trained on the epoxy to help even further, the filler cured sufficiently to allow sanding after lunch, enabling me to continue with masking and final primer preparations.

With cleaning, masking, and other preparations complete, I applied the first of two planned coats of white primer.

After a few hours, I could go right over with a second coat.

The owner asked me to fill a series of small, abandoned fastener holes in the hull, just beneath the gunwale, so to start the day I prepared the holes by using a countersink to enlarge them a bit, then, after masking over the insides, filled the holes with an epoxy mixture.  Later in the day, this had cured enough for me to sand and refill as needed.

With the varnish work complete, I removed all the masking tape, and reassembled the support beneath the center thwart.  Then, I secured the after oarlocks with new bronze screws.

Otherwise, I let the fresh varnish sit for most of the day, giving it additional cure time before I had to flip the boat over and prime the hull, which would by my next (and final) task according to the project scope.

After a light sanding and thorough cleanup, I applied the sixth coat of gloss varnish to the thwarts, gunwales, and other woodwork in the dinghy.

Fifth coat!  What more is there to say?

I know not what, so have a good day!

Following the usual procedures, I completed the fourth coat of varnish.

Continuing the process with the brightwork, after a light sanding and cleanup, I applied the third coat of varnish to all areas.

After lightly sanding the first coat of varnish and cleaning up as needed, I applied the second coat of gloss varnish to all areas. 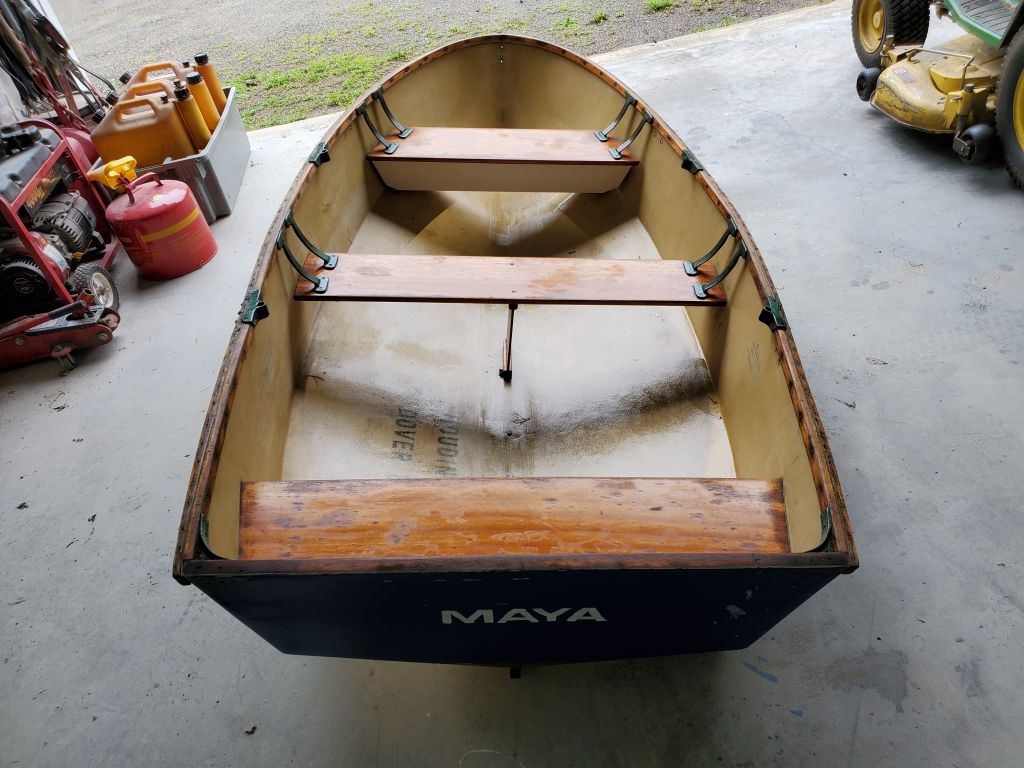 To begin the day’s work, I sanded the hull to prepare it for new primer and eventually paint (though the finish paint was outside of my project scope).  After briefly experimenting to determine how much sanding the hull would require, I eventually went over the whole hull with a finish sander and 80-120 grit paper, removing all of the blue paint and getting down to the sound substrate beneath.  The green paint below had been well-applied, with primer beneath, and since it was sound I did not bother trying to remove all the old primer and paint, as what remained would make a good substrate for new primer.

Next, I turned the boat upright again, and sanded all the woodwork as needed to prepare it for varnish.

After vacuuming and solvent-wash, I masked off the hull and hardware as needed all around the boat, inside and out.  Since I’d not been able to remove the ring fitting on the inside of the transom, I used small stuff running from an old hardware hole in the stem (these holes and others to be later filled before hull priming) to secure the ring tightly to keep it out of the way during the upcoming varnish work.

Later, after final preparations, I applied the first of at least six coats of gloss varnish to all the wooden parts.

The owner of this classic Dyer Midget (8′) dinghy asked me to strip and refinish the interior woodwork (seats and rails), as well as to prepare and prime the hull for him for later painting.

The boat as delivered featured the original translucent/bare fiberglass interior, woodwork in generally good condition with partial and thin coats of finish in place, and a hull that had been painted at least twice, with the most recent paint being a bold blue in marginal condition.

The boat was wet from the rain outside, so my first task was to dry things off, after which I removed the after two oarlocks, which a previous owner had bolted in place through the inner and outer rails (and hull), but this left dangerously protruding nuts on the exterior.  The original oarlocks (including, still, the forward set) had been secured with screws, and the owner asked that I do the same with the after set.

Hoping to remove some of the other hardware before stripping and varnishing the wood, I tried several of the screws, but the old bronze screws were crumbling, and it was clear that there’d be no clean removal of the remaining hardware, so I left things be and planned to work around the hardware instead.  I did remove the vertical plywood support from beneath the center thwart, as this would make it much easier to clean up and refinish this part separately.  I did have to carefully drill out the screw heads in order to remove this piece, but it seemed worthwhile to make working on the semi-hidden piece more straightforward.

Now the boat was dry enough so I could get to work with heat gun and scraper, and during the afternoon I removed all the existing coating from the rails and seats.  The wood beneath was in good condition, with a few dark stains characteristic of old mahogany.

I flipped the boat over and finished up the day’s work by removing the paint and other finish from the undersides of the outer rails.