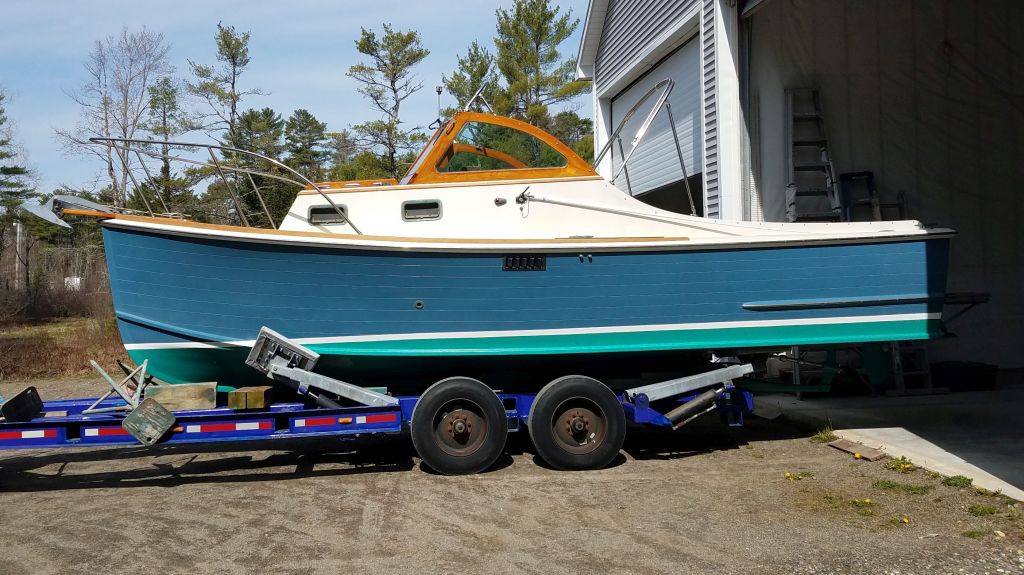 After working on an unrelated project part of the morning, I got off to a slow start with some preparation for the canvas contractor, who had been engaged to build new interior cushions, and also rebuild/reconfigure a helm cover that he’d built for the boat years before.  So to start, I cleaned out all the stuff that was stored on the v-berth, making room for him to come pattern.  While he was on board, I left him to his devices and kept my safe distance.  While he was here, he also patterned a mainsail cover for another boat at the shop; I’d set up the mast, boom, and sail for him earlier in the morning, out in the yard.

With that work out of the way, I got going with the brightwork.  Some of the trim, particularly the eyebrow but also portions of the toerail, had suffered from essentially freeze-drying damage:  small amounts of moisture beneath the varnish, when subjected to the winter’s now all-too-typical and frequent freeze/thaw cycles, basically blew the varnish off the wood in these areas.  While I’d actually stripped and revarnished the toerails the last time the boat was here (the work was done in October 2018), and the failures there were disappointing,  the eyebrows back then had shown some signs of aging, so it wasn’t as if they’d been pristine before this past winter.  Even so I was appalled when I saw their condition.  The eyebrows, and probably the toerails, where the varnish had failed in a few spots starting at the intersection with the deck–a common failure point–would require stripping; other pieces of trim, especially the trim around the edges of the cockpit, probably required stripping as well.  The windshield frame had its usual trouble spots at some of its myriad seams, issues I’d dealt with over and again during  the years, and I’d assess that as I went, though my initial feeling was that stripping the windshield was something to be scheduled for a work session in the future rather than now.

Next, I removed all the trim and hardware that I could, preparing all the loose trim pieces for their maintenance work.  This left things at a good place to start with the real work next time.